As the warm winds blow in to lift the veil of dullness that winter imposed on everything, the newly inhaled life invigorates humans and nature alike. A feeling of encouragement and zest holds sway, things are on the move. In Japan this sentiment is emphasized by the fact that spring often marks the end and the beginning of terms. Students graduate or change schools (卒業; そつぎょう and 転校; てんこう respectively), businesses welcome new employees or rotate roles (incl. 転勤 tenkin, job relocation within the firm to other prefectures or even countries), others search for new housing (引っ越し; ひっこし). Thus, the period may be considered as a time of transitions to the unfamiliar, but also goodbyes to established habits.

Girls Day, Hinamatsuri (雛祭; ひなまつり), at the beginning of March kind of ushers in the warmer season as sunny days become more frequent. Some days may be still unexpectedly chilly, but the weather tempts to go out on foot or take a ride through the area to observe how change takes place.

Whereas spring is always anticipated, Ohanami (お花見, the event of cherry blossom viewing) decidedly represents the height of the season. Everyone is longing for their beloved cherry blossoms, the Sakura (桜). Families, school classes, groups of friends and even swarms of business people flock to the parks to enjoy the jovial and scenic atmosphere outside. One need to be quick though to reserve good spots as it is a race for space, particularly so on weekends.

For companies, new hires are assigned for Bashotori (場所取り) to go out early in the day to fetch and occupy best venues, where the rest of the crew may settle down later on for the party. When WIFI and Smartphones were not as accessible as today, it might have been a welcomed occasion to escape from the boss’ radar or the busy working schedules. Nowadays however, one or the other worker may curse technology for bereaving of this unique opportunity of some laidback moments. Portable devices handy, they go on their quest. Often it is also up to those newbies to arrange for the catering and the entertainment of the group (i.e. singing).

Popular viewing spots are along rivers, temple sites or on the spacious castle compounds with walls and keeps in the backdrop. Indulging in the aesthetics of the trees and there flowerage though is opportune at any location, even a single tree is a majestic object to behold. Personally speaking, I always enjoyed in venturing out to find locations that were not packed because I could go around and take everything in without commotion around me. The serenity in those moments gave it depth and something that touched the soul within.

As much as spring is a spectacle for the senses, it is definitely also one for the palatine. The local cuisines take up on the seasonal theme of the cherry blossoms 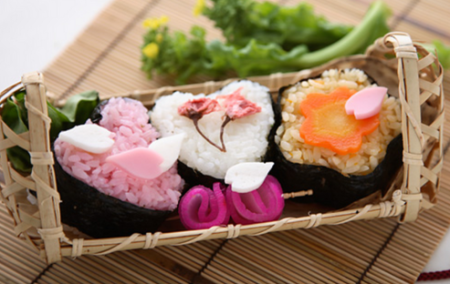 as a source of inspiration. The result, elaborately decorated meals and Bento lunch boxes for on the go. Foods associated with the pink color of the Sakura, then take its kanji character, like 桜エビ (Sakura ebi/shrimp), 桜マス (Masu salmon), 桜肉 (sakura niku; horse meat) and 桜貝 (sakuragai; shell kind). For people with a sweet tooth, there is the 桜餅 (Sakura mochi), rice cake with a filling of red bean paste wrapped in a preserved cherry leaf.

When it comes to 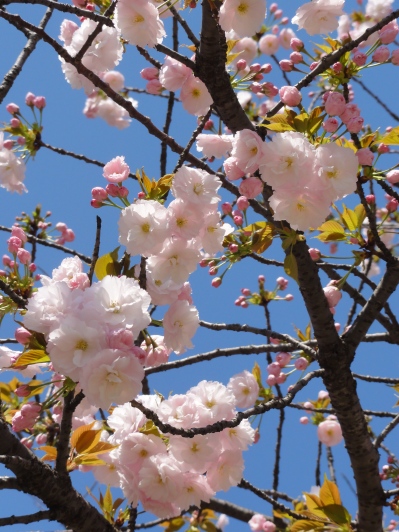 photographing, there is so much diversity that can be found in Sakura. Not only is there a wide range of different species, but when looking closely one will discover that branches, flowers, buds beautifully fuse with each other forming garlands, canopies, gates, alleys, tents, spirals that leave the spectator in awe during the moment itself, perhaps even for a lasting impression during a lifetime. What may be discovered is up to one’s own imagination.

The blooming period of the Sakura spans about two months starting on Okinawa Island all the way up to the Northern spheres in Hokkaido. The lifespan of the flowers themselves, depending on weather and species, lasts about 1-2 weeks. The wind eventually takes its toll. But even then people look at it from an aesthetic view point, like wads of snow that cover the grounds in a temporary white. The falling of the pedals is then tellingly called Sakurafubuki (桜吹雪; さくらふぶき). When the lasts of petals flutter downward, one inevitably becomes aware that nothing lasts forever. This melancholic consideration that every aspect of life is ephemeral and imperfect, emanates from the ideology of Wabi Sabi (侘び寂び). Even with their disappearance, there is one comfort that remains, which is that the Sakura will one day return to delight us with their glory and essence again.

Following some old pictures I dug out while in search for material for this article.