Since my last pop-culture related post nearly 2 years have passed and it was more or less about the same subject 😝 With all the community and fan blogs on anime and manga out there I’m never able to keep pace, so I rather choose to focus on other areas. I make an exception with this article though as I did at the time when I wrote about the release of Dragon Ball Super 🔗. Back then, it was also the first time I learned about Dragon Ball Heroes (ドラゴンボールヒーローズ; DBH) and actually intended to make a post about it. However, priorities changed and I left it on the side. Now, I incidentally came across the topic again just recently and it bugged me that I never managed to write that post. So I shall pick it up once more and set about this article under the motto, better late than never 😄 Here we go!

It should have become an ordinary afternoon. School is finished and homework is done, you and your friends rally to the favorite spot in town, the local game center to immerse in carefree hours of play and to talk shop about Dragon Ball – your favorite hobby! But things turn out totally different, as you suddenly get sucked into the game with heart and soul, the moment you place down those cards onto the gaming machine monitor…

… the moment you open your eyes again, you wear strange clad, the air is filled with explosive energy and a scorched scent comes to your nostrils. ‘What’s happening here?’, you ask, without having too much time to compose yourself, but to take immediate action or else you will take a beating! – Around you a fierce battle is in motion and out of nowhere Dragon Ball’s mightiest opponents will challenge you for a blow. But don’t despair, you will be equally surprised to suddenly have characters such as Goku (孫 悟空), Vegeta (ベジータ), Piccolo (ピッコロ) and Gohan (孫 悟飯) on your side to give you backing. Even Son Goku’s mother, Gine (ギネ), might show up to lend a hand. Yes it’s all happening at Dragon Ball Heroes and you are now part of the game!

What is Super Dragon Ball Heroes?

Super Dragon Ball Heroes (スーパードラゴンボールヒーローズ; SBDH) is a Japan exclusive arcade trading card game by Bandai Namco (バンダイナムコエンターテインメント) that was launched in November 2016 as the continuation of its immensely popular predecessor, Dragon Ball Heroes carddass game that was running since 2010. The trading card game, which is based on all the works of Akira Toriyama’s (鳥山 明・とりやま あきら) manga and TV anime, spanning from the original Dragon Ball (ドラゴンボール) series to Dragon Ball Z (ドラゴンボールZ), Dragon Ball GT (ドラゴンボール), Dragon Ball Kai (ドラゴンボール) over to the latest installment with Dragon Ball Super (ドラゴンボール), has proven an extremely successful concept, amassing a huge follow of over a 12 million players in the country and exceeding the staggering 10 billion Yen mark with millions of cards and related merchandise sold since its release. This accounts for an impressive share of the entire digital kids game market in Japan and with the expansion of the game an end of it is not in sight.

Players slip into the role of kid avatar heroes (ヒーローアバター) to battle alongside their own admired super heroes like Son Goku and other familiar characters that help them during their adventures. Together they roll up the chronological sagas of the Dragon Ball realm to take on ever new, ever stronger opponents on their mission to rescue earth and the rest of the universe. Unseen villains enter the stage, unprecedented transformations take place, new battle grounds to be unveiled – you will be in for an action-packed spectacle!

The avatar types can be freely chosen and need to be registered with name and age. The Avatar Card is included in the Hero License Set and is valid for one avatar registration. The cool feature the avatar system brings along, is the ability to actually adapt and learn 💪 all the special moves of established hero characters, allowing them to grow their skill set and become complete warriors in their own right. So the game also builds on character development with these avatars, which provides individualism and personal connection to the game.

Currently, 7 avatar races are available with Saiyajin Boy (サイヤ人おとこ), Saiyajin Girl (サイヤ人おんな), Cyborg (人造人間アバター), Namek (ナメック星人アバター), Freezer (フリーザー族アバター), Kaioshin (界王伸アバター) and Evil (魔人族アバター) races, but 1 more specie is on the way with the Darkness Evil (暗黒魔人族アバター) race. The races are then in turn subdivided into 3 classes, with Hero Type (default), Elite Type (from level 8+) and Berserk Type (from level 12+). To advance to the next class or obtain certain powers such as the Super Saiyajin form, Shenlong (神龍・しぇんろん; dragon that will appear when all the Dragon Balls are summoned) may grant players wishes.

Here some of the character designs and different races in the overview: 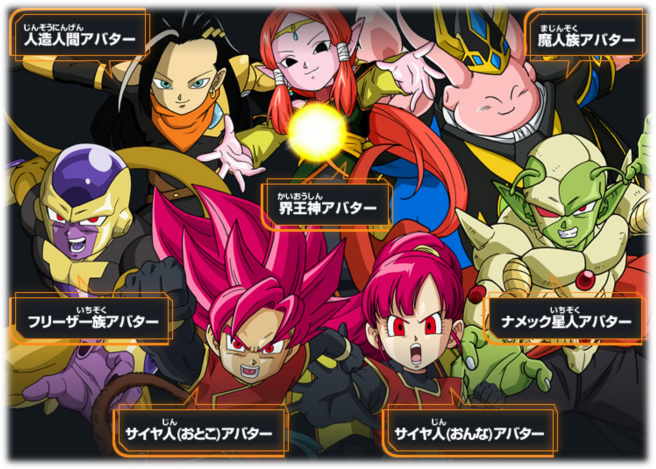 Although the game is targeted at children as main segment – the playable child avatar heroes, deliberately chosen in male and female form, so to appeal to both genders alike – Dragon Ball for what it is, of course also attracts older generations of fans, not least for the popular pastime of gathering up collectibles that are indeed abundant with this trading card game. Funnily enough though and to creator Toriyama’s own surprise, many of the domestic players seem to have not even read or watched the original works yet. Lo and behold 🙃

As the game is not available in this form outside of Japan, the Dragon Ball Heroes trading card game is more commonly known to the foreign fellowship of the Dragon Ball through the cut-scenes videos circulating on the internet such as the inserted one above. Heated debates and also some frustration can be observed among foreign fans as to why the arcade game is not made an export in the first place or at least those opening videos turned into something like a movie or a series itself, giving it clearly favor of the ongoing Dragon Ball Super series, which is not necessary know for it artistic achievements. Well, it can’t be helped I guess, for those who want to experience the real deal with Super Dragon Ball Heroes, I’m afraid, you got to go to Japan 😉 I also haven’t played yet it in person, but I definitely want to check it out on one of my next trips to the country. It’s all about curiosity! 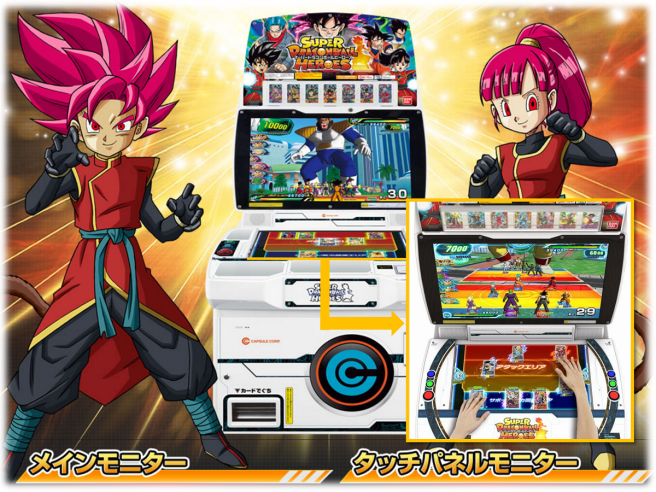 Meanwhile also game software exists for Nintendo consoles like the 3DS that can be played outside Japan, but the fun of it all is going to the store checkpoints to play it on the machines as seen right above and of course the collecting of the various character cards themselves. With the collectible cards that can be bought right at the machines in limited quantities, players are able to not only choose their desired characters, but they are also able to upgrade and transform their heroes. The periodically held challenge missions and local fan events enhance the overall fan experience. Furthermore, a live-ranking that is published daily on the main homepage (link further down ⬇️ under sources), players across the country can race for the throne of fighters and see who holds first place at any given time. This gives the whole affair a much wider dimension and something to compete for💪 – and competitive they are in Japan.

The machines that come with a main monitor and a touch-panel monitor are quite sophisticated. Since the switch from DBH to SDBH the screens have been enlarged by 140% and battles can be followed with an excellent HD resolution. On the touch-panel, where also the cards are laid out and moved between Attack Area and Support Area, players may set in motion different actions by sliding or touching, known as Touch Action Ability, with which they will influence the impact of attacks and defenses, so to decide the outcome of the battle.

There have been renovations for the software and game play, too, but the game principle of Super Dragon Ball Heroes mostly follows the former game. After creating one’s own avatar, the player assembles a team of fighters and it’s the goal to either bring down the HP level as much as possible or completely defeat the opponent in max. 5 battle rounds. In comparison to the predecessor, the number of cards used during the battle increased to 7, from the previous 5 character cards. Good news for owners of older cards; those cards are still compatible with the new version of the game and won’t render useless as players move on in the evolving story.

The game can be played starting from 1 card and one may optionally buy a separate Capsule Corp. License (ヒーローバッジライセンス; Hero License) to save avatar and battle data after each session. With bonus equipment in form of Hero Badges (ヒーローバッジ) that are received after fights, one can boost Attack, Defense, Support, Special moves during upcoming battles. Besides the single mode against the machine, it is possible too, to go against friends in epic battles, if they activated challenge mode on their machine. Another mode that lets interact with companions, is the Friend Registration (フレンド登録) feature. With the registration the avatar character of a friend can come charging during an ongoing battle for support and matching is possible as well. Regardless, if alone, in twos or more, plenty to do and to get hooked on for players of this unique trading card game.

Herewith I’m almost at the end of this article about Super Dragon Ball Heroes, with which I want to give an overview of the game. As said, I have not played it myself so far, so I can’t go too much into details, when it comes to the battles themselves. No doubt though, the game with its interactive game play, countless attacks and different modes, invites for many action-loaded hours of fun in front of the double-monitors, but I think, what really puts this game into a spot above others is the ingenious combination of various pop-cultural elements, like the collecting and exchanging of the playing cards, raising and shaping a character and not at least the arrangement of a enthusiastic member community. The package as a whole makes it an absorbing and rewarding experience of its own for players and as long as Bandai Namco keeps coming up with new story arcs and characters – and as long as they don’t run out of hair colors – the trading card game in this form or another, will have a long way to go 😎

I hope that those interested into the card game have a chance to check it out in person, however, if this is not possible, below a choice of Dragon Ball Hero and Super Dragon Ball Hero merchandise that you can pick up on amazon.co.jp through their global program. You might not be able to use the items on a game, but they still make for nice collectibles in your Dragon Ball collection or are fun to trade with friends (clickable images):

Even though I could hardly keep track of new developments of the franchise, who would’ve thought!?, I might get sucked into it once again with Super Dragon Ball Heroes 😃

How about you? What do you think about it? If you have any comments or enjoyed the article, please feel free to like 👍, drop a feedback below 💬 or share it in your network & social media👥.

A good one ahead and stop by soon again at MyLittle Dejima!